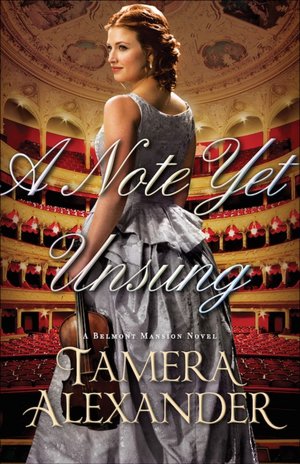 At heart, she was a violinist. No other instrument, for her at least, could capture the strains of the soul’s deepest yearnings and desires, its bitterest disappointments and losses. – Tamera Alexander: A Note Yet Unsung (2017)

I first read Alexander‘s book shortly after its release in 2017 and loved it! As a musician, I’m a highly auditory person, so when I discovered the audio version a few weeks ago I was thrilled! (It is now available for free for new audible users or 1 credit for existing members.)

Alexander sets her historical romance in the 1870s in Nashville, TN. She recounts the experiences of twenty-three-year old Rebekah Carrington, a violinist who returns to her hometown after ten years of musical study in Vienna. She desires to play with the newly formed Nashville Philharmonic, but is told she cannot join due to her gender, as women are not allowed to play violin in public. However, she seeks to persuade the new conductor, Maestro Nathaniel Tate Whitcomb, that she should be permitted to join the orchestra. She hopes he will fill the position based on merit and not gender. However, the conductor works with many prejudiced donors who oppose this sort of progressiveness.

During their weeks of collaboration together, Rebekah helps the Maestro write his symphony that the orchestra will perform for the opening of the new opera house in Nashville. The plot follows their relationship and careers, with several twists along the way.

As a violinist, I found Alexander’s depictions of “our kind” spot-on. She described the perfectionism, creativity, passion, and even irritability of the conductor’s personality, a combination of characteristics which don’t stray far from the mark. I laughed (and grimaced), as I saw myself in those depictions.

I loved Alexander’s descriptions of the importance of the instrument in our lives, how it allows us “to capture the strains of the soul’s deepest yearnings and desires.”

I especially enjoyed her inclusion of a musical playlist, which allows readers to hear the songs described in her story. Listening to the selections of Mozart, Chopin, and Beethoven enhanced my experience of the text and gave me an auditory component to accompany the literary page. This fusion of the arts exemplified the romantic ideals of the 19th century, an era when all forms of artistic expression were intertwined, not unlike our media-driven society today.

Although the book is presented as an inspirational romance, Alexander addresses several serious themes throughout the story, including sexism in the workplace, the shift from slavery to servant-hood in the lives of African Americans after the Civil War, physical abuse, musicians’ proclivity towards substance abuse, and the difficult effects of degenerative disease in one’s profession (a Beethovenian component). She looks at the important role faith can play in these circumstances.

I found A Note Yet Unsung an enjoyable, captivating book, and would highly recommend it for both musicians and non-musicians alike!