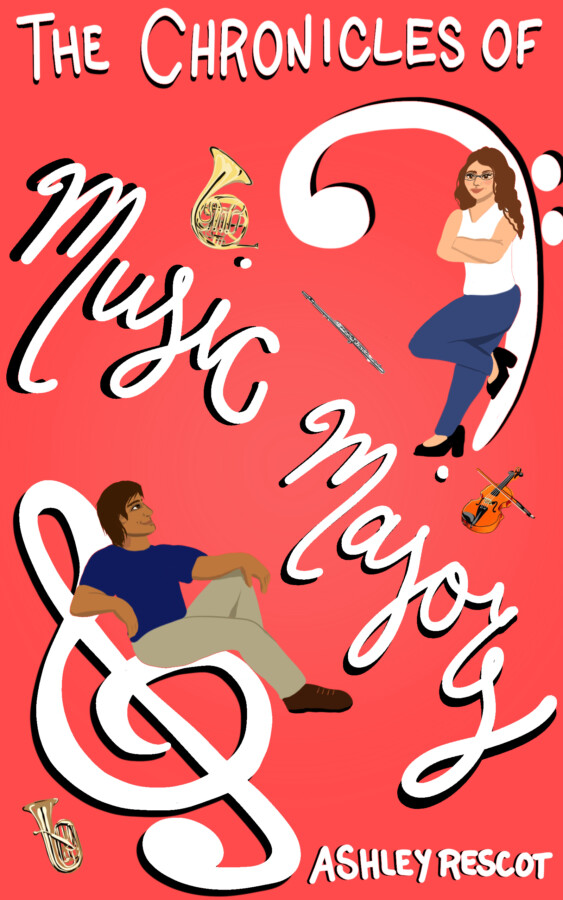 Join the students of the fictional Belton University as they learn to navigate the world of music, discovering friendship, fortitude, and love along the way!

Francesca caught a quick breath between phrases. This flute solo demanded every ounce of breath support she possessed. After playing in the Belton University Wind Ensemble for the past two years, she’d finally achieved her dream—acceptance into the Belton Symphony Orchestra, as a junior.

Her fingers flew over the slender silver metal as if on autopilot. She’d played this solo countless times in the practice room but never with an orchestra.

At the age of nine she’d joined the school band and loved every minute of it. She’d sat first flute all through high school, so her decision to major in music was no surprise.

After the last note of her solo died away, she lowered the instrument to her lap and wet her dry lips. She glanced at the clock at the back of the concert hall. Almost time for break. Her gaze dropped to the bassist in front of the clock. With large, muscular arms wrapped around his instrument, he resembled a teddy bear hugging a giant violin. The bass suited him in size. Cute. Her heartbeat quickened. How had she never noticed this guy? She’d have remembered that tan complexion and mischievous smile.

The conductor rapped on his music stand. “Take five. After the break, we’ll run the last movement again.” He shuffled the music in front of him, then strode off stage.

Francesca turned to face Carl, the clarinetist seated behind her, his instrument in hand. A senior now, he’d joined the symphony a year ago. He pointed to her flute. “Not an easy part.”

She shook her head. “My fingers were shaking.”

He laughed. “It gets easier over time. You need to relax.”

A tense smile pulled at the corners of her mouth. “How?”

He cocked his head to the side. “I’ll think of something. Right now, I need to catch up with Brandon.”

“A buddy of mine.” He sauntered away.

Francesca turned back to her music. Five minutes to practice before rehearsal resumed.

After the short break, the conductor raised his arms, baton in hand. The trumpet fanfare rang in Francesca’s ears as if to rouse her to action. The muscles in her fingers clamped the instrument.

When the low strings took over the melody, her gaze moved to the bass section in search of the cute teddy bear. He wasn’t there. Don’t be stupid, Francesca. You don’t even know him. Focus.

She raised her flute and drew a deep breath.

As she placed the metal to her lips, a loud honk jolted her out of position. What on earth is Carl up to?

She twisted to flash him a fierce glare. But it wasn’t Carl.

“What?” Her fingers tightened on the flute.

The teddy bear bassist sat in the chair behind her, Carl’s clarinet clutched in his massive hand. He grinned.

Her stomach lurched. Where was Carl?

Out of the corner of her eye, she glimpsed a wave from the bass section. Sure enough, Carl sat on a stool, dwarfed behind the enormous instrument.

Warmth crept into her cheeks as she resumed her solo, all nerves with the cute guy behind her.

The conductor shot daggers from his eyes as he surveyed the orchestra in search of the troublemaker.

After her solo, Francesca spun around to face the bass player. “What in the world?”

He extended his hand. “Hi there. Nice to meet you. I’m Brandon.”

She hesitated, then shook it. Electricity shot through her arm. “Why on earth did you trade instruments?”

Brandon chuckled and scratched his stubbled chin. “Carl said you needed a change in the winds.”

Francesca pursed her lips. “And you agreed? You’re in a heap of trouble.”

He winked. “It’s all right. I’ve got the best seat in the house.”

Ashley Rescot jazzes up the lives of music students in ways that are both fun and easy to relate to. Whether or not you are a musician, you will enjoy learning about music and romance from this charming collection of characters.

The Chronicles of Music Majors is a rollicking good time! I found myself on the edge of my seat, perpetually enticed to read “just one more page.” Ashley Rescot’s artful depictions of the inner workings of Belton University’s School of Music left me longing for my music major days. A true gift to music lovers of every age, and a delightful read from start to finish!

Ashley Rescot’s The Chronicles of Music Majors offers readers a refreshing lift as she invites us into her fictional music world. Her sweet romantic stories hit all the right notes with perfect pitch. My favorite story would have to be the last one I read–seriously, it was hard to choose because each has its own unique twist. A delicious read. If you have a musical background or simply love music, this collection of stories is a must.

As a lifelong singer and professional performer I loved Ashley Rescot’s short story series THE CHRONICLES OF MUSIC MAJORS.Her descriptive writing style and interesting characters pulled me in completely. In fact, I was disappointed when the story was over! I wanted more! I especially loved the short stories Christmas Glee Club and Get a Handel on It. These two stories in particular should be fondly reminiscent to anyone who has ever participated in a high school chorus, orchestra or band concert.

My mother was a music teacher, and Ashley’s characters brought to life so many memories of that special time in my childhood. Her vivid descriptions bloomed the aroma of leather-covered violin cases, the tinkling of piano keys, the om-pa-pa of accordion notes, and the excitement that filled the concert halls. As I turned the pages, I wore the shoes of the students at the fictional Belton University and wished the story would never end.

I really enjoyed reading these stories! So many experiences that are universal to college-aged students, discovering life and love in the midst of their musical studies. Each one strikes the balance of developing the characters and situations within the structural confines of a short story. Well done!