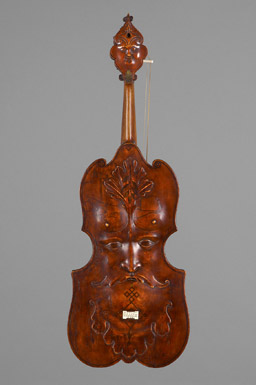 In recent years I have found the history of the violin quite fascinating. Here I look at a few of the precursors to the violin: the lyre, the rebab, the vielle, the rebec, the lyra family, and the viol family.

The ancient Greeks and Romans used beautiful lyres to accompany their vocals. Unlike the violin, these stringed instruments were plucked, as opposed to bowed, more like the modern-day harp (Cizek, 49).

The vielle is the earliest known bowed instrument. Similar to the cello, it had an endpin-like spike to secure it to the floor. It served as a precursor to the medieval rebec.

This instrument was constructed in the shape of a pear, and used three to five strings. It was not played under the chin like the violin, but rather upright.

During the middle ages Europeans played vièles—instruments made of three parts: top, bottom, and sides (Cizek, 49). They were larger than the modern violin, usually oval-shaped, and used three to five strings.

The rebec, a descendant of the Middle Easter rebab, was made up of three strings. These instruments were composed of only two parts: the top and a curved underside (Cizek, 49).

The lira da braccio is usually considered the predecessor to the violin. (Cizek 49) The lira da braccio was a beautiful, precise instrument for its time. It was quite popular during the Middle Ages and the Renaissance. Its form resembles that of a woman, which for Renaissance musicians represented the connection between love and music. (Cizek, 51). The f-holes were shaped as Cs instead of Fs. Many of the lira had carvings of faces on the backs and scrolls. They had more strings than the contemporary violin, some with 5 on the fingerboard and an additional 2 off to the side (Cizek, 52).

At the end of the Middle Ages, the vièle evolved into the viol. The viol family covered a wide range of pitch, similar to the modern string family, from bass to soprano. They were usually divided into two groups based on where the instrument was situated. The viola da gamba was played between the legs like a contemporary cello, and the viola da braccio was placed on the shoulder like the contemporary violin and viola (Cizek, 49).

The viola d’amore were usually composed of seven melodic strings, as well as seven sympathetic strings, and are often considered the most beautiful stringed instruments of all time (53). Their f-holes were carved in the shape of flames, and painted faces often decorated their scrolls. Some of the most renowned luthiers of this genre include Jan Oldrich Eberle and Tomas Ondrej Hulinsky of Prague (Cizek, 53-55).

These beautiful instruments provide a rich history for the birth of the violin in the 17th-century.

3 Replies to “Before the Violin: Early Stringed Instruments”