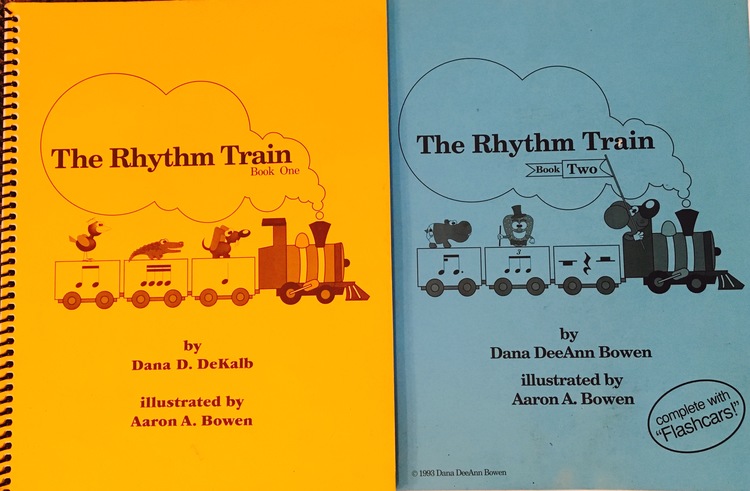 “Everything living has a rhythm. Do you feel your music? ”-Michael Jackson

As a violin instructor of many young children, I believe it is important to use resources that appeal to the age demographic I teach. In addition to the resources I mentioned in my previous post, I use The Rhythm Train books with my young protégés. If you ask my beginner students what is their favorite part of the lesson, they usually say “Rhythm Train!”

The Rhythm Train series was written by Dana (Bowen) DeKalb. It is a wonderful resource for young musicians because it gives them a chance to become familiar with fundamental note values, ranging from quarter and eighth notes at the beginning of Book 1, to triplet, eighths and dotted quarter notes in Book 2. Clapping rhythms gives students a sense of accomplishment, even on their first lesson when they don’t yet know how to play anything on their instrument (let alone how to hold it!). It also allows them to sit down and rest their often-weary legs!

The Rhythm Train appeals to children because it is full of adorably illustrated animals, with each animal representing a different rhythm. For example, when students see a quarter note they simultaneously clap and say “dog.” I also typically follow-up by asking them to give the traditional note name and how many beats it gets. Even the youngest beginners are able to clap difficult rhythmic passages, including dotted eighth sixteenths, due to the creative animal names. In addition to clapping, kids can stomp their feet to the rhythms in order to use their whole bodies, not just their hands. With time, as they become more comfortable with the rhythms, teach them to use traditional numeric counting (1-e-and-a) instead of the animal names in order to prepare them for group playing. This is also a good stage to add the metronome to practice keeping a steady beat.

When I interviewed Dana about The Rhythm Train series, she gave me some useful background information on the project. She invented the concept while living in Alaska and expecting her second child. She said the “bull moose” (used to clap the half note) was inspired by the many bull moose she saw near her home! She had already been using animal names to teach rhythm to her students but thought it would be fun to use them in a book with pictures.

Dana collaborated with her illustrator and graphic designer, Aaron Bowen, to come up with the cute, cartoon animals that help bring the books to life. The train cars are meant to resemble measures on the staff, allowing for easy legibility. The Rhythm Train compliments the Suzuki Violin series well, as it covers most rhythms encountered in Suzuki Books 1-3. The books are useful to teachers of any instrument who would like a creative way to teach rhythm to young people. Even my two-year-old loves looking at the notes and pictures and trying to clap along!

During her interview, I asked Dana if she had any additional creative uses for the books. She said that besides simply clapping each page, students and teachers can practice clapping different lines at the same time in order to simulate ensemble playing. Clapping together from the books is an excellent exercise to do at group lessons. For example, in her “chase” activity, one student starts the first line, and the second begins once the first student moves on to the second line.

Parents and teachers can laminate the flash cards at the end of the book so that students can make up their own trains. This has been a hit with my studio at group lessons, especially with my Pre-Twinklers! Teachers can also set up various stations during the lesson, using The Rhythm Train as one station among many in order to help students move around the room.