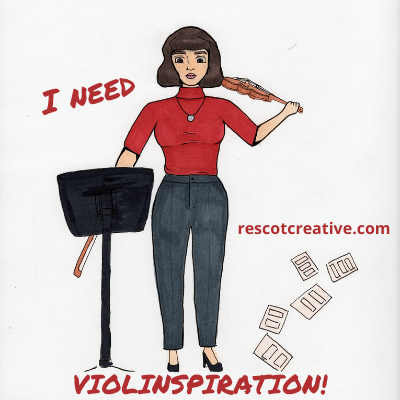 Research from the Enneagram Institute

Ones are conscientious and ethical, with a strong sense of right and wrong. They are teachers, crusaders, and advocates for change: always striving to improve things, but afraid of making a mistake. Well-organized, orderly, and fastidious, they try to maintain high standards, but can slip into being critical and perfectionistic. They typically have problems with resentment and impatience. At their Best: wise, discerning, realistic, and noble. Can be morally heroic.

Key Motivations: Want to be right, to strive higher and improve everything, to be consistent with their ideals, to justify themselves, to be beyond criticism so as not to be condemned by anyone.

Victoria Pearson clutched the neck of her violin as musicians filed onto the stage of Belton University’s concert hall. Habit urged her to follow suit, but her new position as first chair kept her backstage––alone. Nervous anticipation quickened her pulse. A cacophony of flute trills and trumpet blasts bombarded her ears as the members of the orchestra warmed up. She smoothed the wrinkles in her black dress. This time, everything must be perfect.

She ran her free hand through her brunette bob. The softness of her hair, like silk, soothed her shaking fingers. A glance at the elegant shape of her instrument made her giggle. Jerry Chang, the first-chair cellist, had compared her physique to the violin––tan from the sun and similar in shape with its hourglass curves.

The conductor gestured with his baton-free hand for her to proceed.

A thrill of excitement shivered down her spine. She’d worked her entire college career to become first chair––concertmaster of the orchestra. Now, her senior year, she’d achieved her goal at last. Hopefully she could keep her position after the next round of auditions. Pride pulsed through her veins, followed by a wave of performance anxiety. She needed to lead the violin section with perfect precision to bolster her chances of acceptance to Johann Conservatory of Music for graduate school in New York.

She drew in a deep breath as she stepped from behind the heavy black curtain onto the luminescent stage. The light’s glare forced her to blink. She strode next to the conductor’s podium, then bowed to the audience. The intense light continued to blind her.

Her heart pounded like a kettledrum. After a quick swivel to face the orchestra, she pointed a finger at the oboist to play the tuning notes. When his note pierced the air, Victoria nestled the violin in its accustomed place on her left shoulder, ready to tune the four strings. Her bow glided across the A, then the adjacent D. The low G peg had slipped, so she tightened it before tuning the high E string.