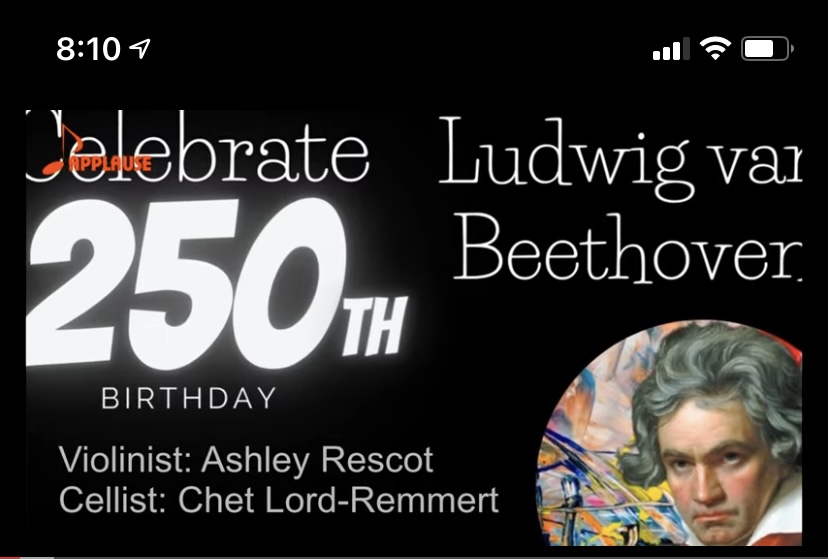 To close out the year, I thought it fitting to honor one of the greatest composers of all time. This month, classical music aficionados around the world are celebrating Beethoven’s 250th birthday.

I was thrilled to be featured by Applause to the Musician for Beethoven’s Duet in C Major with cellist Chet Lord-Remmert.

Definitely check out the rest of their playlist: Celebrate Beethoven’s 250th Birthday!

I also wanted to share my tribute to Beethoven from my upcoming music novel. Enjoy!

Mr. Vatchev (the professor) pushed his glasses up higher on his nose as he paced back and forth in front of the class.“As you all know, Beethoven achieved legendary status as one of the most ingenious composers of all time.”

Victoria grew dizzy from his perpetual motion, not to mention the heat that permeated the space between the closely-seated classmates around her. Why didn’t the university invest in better air conditioning?

“His brilliant compositions still baffle musicologists, performers, and audiences today.” The maestro paused a moment, hands raised, as if for dramatic effect. “His influence became so pervasive  that many of his successors struggled with what to write after his death. How could anyone compete with Beethoven after he’d stretched the concept of the symphony to its limits in his legendary Ninth?“

Jerry, seated next to Victoria, slid his hand under the desk and ran his fingers over hers. A tingling sensation shot up her arm. So hard to concentrate.

“The epic quality of ‘Ode to Joy’ left traditional composers little room for expansion. Music historians refer to this problem as ‘The Beethoven Complex.’” Mr. Vatchev clicked his remote for the music to begin, and the sound of “Joyful, Joyful” rent the air.

Victoria closed her eyes. What would it be like to experience this for the first time as a nineteenth-century audience member? If this recording could fill this small classroom with such power, how much more impressive to listen to a full orchestra in an elegant European symphony hall?

By now, Jerry had completely intertwined his fingers in hers and held them fast. As the last chords of the fourth movement died away, her eyes fluttered open again. “So beautiful,” she whispered.

Mr. Vatchev spread his arms wide, palms upward. “What next? How many of you feel inspired to perform one of your compositions after that?”

No one raised a hand. Victoria would have, if Jerry wasn’t holding hers captive.

“We all face the Beethoven Complex as we struggle to create something new. At times we ask, ‘What’s the use? It’s all been done before. Why should I write on this topic, or perform this piece when countless others have already mastered such ambitions?’”

“He has a point,” a clarinetist whispered.

“The difference is,” the professor continued, “you bring your own personal experience to the work, one which no one else can contribute. Those who realize this and take it to heart are the ones who create the next monumental artistic work.”

Victoria fidgeted in her seat. How could she do that when she’d already turned away from her dream? Could she still contribute? Hopefully Jerry didn’t notice her discomfort.

Mr. Vatchev slid his fingers over his mustache. “Fortunately, the Romantic composers recovered from this complex and reached new heights of musical innovation. Imagine a world without Wagnerian operas, Tchaikovsky ballets, and Saint-Saëns concertos. Any one of you could become the next great composer, virtuoso, or teacher. But you must take risk and try. And if you fail, get back up again and try again.”