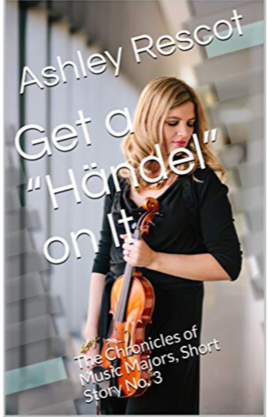 Karen Schneider clambered through the sea of musicians to her assigned chair in the symphony hall. She gritted her teeth. Second chair. With a swift motion, she pulled her hundred-year-old violin from its case. The smell of antique wood filled the air. The varnish, faded after many years, contrasted with the shiny new instruments held by several other players. But for a violin, beauty increased with age.

The black dress Karen wore hid her non-existent hips like a grocery sack. She wiped damp palms on the chiffon fabric, then took her seat. I hope the concert goes well today. For Angie’s sake. Karen scanned the assembled musicians in search of her sister. No sign of her yet.

Choir members in forest green robes filed onto risers, music binders in hand. Karen twirled a strand of hair around her finger, grateful to be in the orchestra pit and not on stage.

Her stomach muscles tightened at the curt voice beside her. Ugh, her stand partner, Sarah. “Good evening.”

The girl ran a manicured hand through raven black hair. “Ready for tonight?”

Karen rubbed her forehead. “Yes. Are you?”

“Of course.” Sarah straightened her shoulders. I’ve performed Handel’s Messiah a dozen times. I could play it in my sleep.”

Ever since Sarah transferred to Belton University from Chicago, she’d sat first chair for every concert. How unfair. Karen had spent her entire life in this college town. But now “Miss Big City”had swept in and taken over.

The conductor commanded his place on the platform and motioned for Sarah to tune. She flashed a radiant smile, then played the tuning note as long as possible.

Karen held her breath as she waited for the maestro’s opening cue. At the stroke of his downbeat, she pulled her bow across the strings. The strains of the minor theme filled the spacious concert hall with life and sound. All thoughts of Sarah faded as Karen focused her energy on the music at hand. The notes, fast and powerful, burst from her instrument like horses from a starting gate.

After the lively first movement, the tenor soloist, dressed in a crisp black tux, crooned the words “Comfort Ye My People.” Karen drew a deep breath. After such a volatile winter, especially with the death of her aunt, she relished the comfort of the ancient words. Music served as the balm to her heartache. She’d been Karen’s first violin teacher—the one who’d encouraged her to become a music major. How she missed her aunt’s guidance, coffee dates, and late-night chats. Tears threatened to spill. Now who would champion her career, with her aunt gone and Sarah’s domination of the music scene?

A couple measures of rests afforded Karen the chance to glance at the vocalists. Why hadn’t Angie joined the other soloists on stage? She’d never miss a concert. Karen scanned the back of the stage again to find her sister. The drummer, George, gave her a wink. His shaggy hair hung like curtains around his face. Heat crept into her cheeks as hypothetical visions of the two of them alone backstage filled her mind. As both a classical percussionist and drummer in a rock band, he’d won the title “heartthrob” of the music school. If only he’d ask her out.

A jab in the arm from Sarah’s bow jerked her back to the present. Time for the violins to take the melody. As the they began the theme “For Unto Us a Child Is Born,” a horrible squawk erupted from Sarah’s instrument. She pulled it from her shoulder, her face drained of all color. The E string had snapped.

They both froze. How could Sarah lead the section without one of her strings?

For one brilliant second, Karen’s heart leapt. This is my chance. I can lead the orchestra without her.

That same moment, her sister Angie strode onstage, a radiant soprano in a satin dress that accentuated her curves. Of course she’d waited until her solo to make a grand appearance.

Angie flashed her a smile, but it quickly faltered at the sight of the broken string.

“Do something,” she mouthed to Karen.

She sighed. Although nothing would give her more pleasure than to watch Sarah sit in silence while Karen led the violin section, it wasn’t protocol. Her gaze dropped to the antique instrument in her hands. Could she trust anyone else with this treasure? She closed her eyes, exhaled, then extended her precious instrument to Sarah.

The look of panic on her face softened to one of gratitude. For a split second, their eyes met. “Thank you,” Sarah mouthed as they exchanged instruments.

Sarah clutched the violin under her chin and motioned for the rest of the section to join.

Karen opened her own rectangular case and dug in one of the compartments. I’ve got a spare set of strings in here somewhere. She pulled out a thin spiral wire and threaded it through the hole in the peg. After several turns, the wood twisted into position, just as Angie opened with “Rejoice, Rejoice, Rejoice Greatly.” Karen’s lips curved into a smile as she rejoiced that she could still accompany her sister, whose beautiful voice reverberated throughout the hall like Easter bells.

“Thanks for saving me back there.” Sarah bit her lip. “I’m glad you had a spare string on hand. I forgot to replace mine.”

Sarah smiled. “You’d make a good section leader. Maybe we can trade places sometime if the conductor agrees to it. Your violin is already used to first chair.”

Karen laughed. “I wouldn’t say no.”

“You wouldn’t?” A deep voice sounded behind her.

She spun around to find herself face-to-face with George.

“In that case, how about dinner with me after the concert?” He ran his hand through his shaggy hair. Her heart beat as fast as a drumroll.

“Uhhh…” Her voice caught in her throat.

He placed a hand on her shoulder. “I’ll take that as a yes.” With a quick stride, he returned to his place behind the timpani.

“Let’s go.” Sarah pulled her back onstage. “We don’t want to be late.”

As Karen settled into second chair, excitement welled up in her chest at the prospect of leading the orchestra, not to mention a date with George. At this rate she might as well join the choir for the “Hallelujah Chorus.”