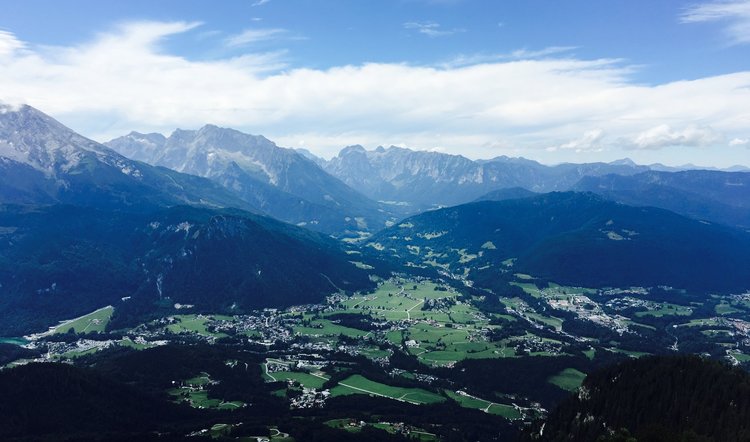 “For I assure you, without travel, at least for people from the arts and sciences, one is a miserable creature!” -Wolfgang Amadeus Mozart

Wow, this quote really hits home after everyone was literally stuck at home for at least two months! I’m afraid that, like Mozart, the travel bug runs in my family. We as humans have moments when we need to escape the mundanity of our everyday lives and experience something exotic. A few summers ago, I interviewed a college music student about a music study abroad program she attended in Austria.

During this unusual summer of limited travel, I thought it would be fun to relive her experience, hoping that future college students will someday have this chance again.

Where did you stay during your time abroad?

I stayed with a host grandma in Salzburg, Austria. It was a small apartment close to Nuβdorfer strasse. I had my own room, but she and I shared a bathroom. My host grandma, Heidi, made me breakfast and dinner every day, which was always amazing!

Where else did you travel while there?

We began our trip in Vienna, where we saw the Hofburg and the Shönbrunn Palaces. We went to Schubert’s birth house, and I was surprised to learn he was born in the kitchen! We also visited Mauthause, a concentration camp from World War II, as well as the Residenz, in Munich, home of the rulers of Bavaria. On my long travel weekend I went to Prague and saw the Jewish Quarter, the Castle, the John Lennon wall, and the astronomical clock.

Tell us about some of your favorite concerts you attended in Austria.

We got to hear Mahler’s Ninth Symphony played by the Vienna Philharmonic during the Salzburg Music Festival. The orchestra was alive and moved and breathed together. It was amazing! I have never really heard anything so moving before. I also enjoyed listening to the Salzburg Orchestra play Beethoven’s Violin Concerto in D Major. I loved the atmosphere of both orchestras. The players would look at each other and smile. They looked like they were having the time of their lives!

Considering Salzburg is the home to Mozart, one of the greatest composers of all time, what is your favorite of his works?

My favorite Mozart compositions are his Violin Concerto No. 3 in G Major, as well as Concerto No. 5 in A Major. I loved playing them! Mozart’s playfulness makes his pieces enjoyable. I also like his piano variations of Twinkle Twinkle Little Star. This may be the result of listening to beginner violinists play Twinkle for too many years, so to hear the creative variations is a nice break!

What was the best musical aspect of the trip?

I loved how accepting of classical music people were in Europe. I like pop music as well, but classical music often has a lack of respect in the United States, even though most music here actually has derived from some sort of classical music. In Munich, my friend and I happened upon the Munich Philharmonic Orchestra rehearsing on an outside platform. Anyone could listen and be a part of their rehearsal free of charge. I was amazed! The members of all the orchestras seemed have a lot of fun. As an observer, I could see when a member loved a particular part of a piece because they would either smile, move accordingly, or even make a face at a friend in the orchestra! The sense of community could be felt by the audience. They love what they do, and they want others to love what they do as well. It proved to me that you do not have to be completely serious to be professional, and that classical music is not just a serious matter!

What did you study in addition to music?

I took a history class on the Holocaust, which was very sobering, yet eye-opening. Hearing about Hitler’s life and how the Holocaust became a rational necessity in his eyes and the eyes of many others was baffling. Going to the concentration camp was humbling, but the strangest part was when we visited Eagle’s Nest, home to Hitler’s bunker and the houses where he stayed for a good portion of his rule. The scenery was beautiful, breathtaking actually. We went on a really fun hike where for a moment I forgot everything and just enjoyed the beauty. Then all of a sudden, I remembered the history of the place. It was quite eerie.

What else did you enjoy apart from the many musical experiences?

We visited the beautiful town of Hallstadt in the lake district, which was surrounded by the lake and mountains. Truly, Hallstadt is one of the prettiest places I have ever seen! From a relational perspective, I loved getting to know my host grandma, Heidi, and other Austrians. To be immersed in another culture was so rewarding. Experiencing how other people live is something I really enjoy. Getting to know Heidi was definitely one of my favorite parts of Austria!

No, but I lived it! Our group visited all of the on our excursions. We saw the church from the wedding scene, the convent where the real Maria Vontrappe wanted to become a nun, and the Mirabel Gardens that are so gorgeous with all the flowers and fountains. We sang in the festival hall portrayed at the end of the movie, and saw many places after which the sets were modeled. The lake and the back of the house were actually only a five-minute walk from my apartment, so I would walk there and do homework for my classes, hang out, or go for a run. I still cannot believe that became a normal part of my schedule!

Describe the typical food/dress/culture you experienced in Salzburg.

They do have a lot of the stereotypical sausages and sauerkraut, but the sausages are nothing like I’ve had in America. Personally I am still not a fan of sauerkraut. Of course schnitzel is a staple. There is wiener schnitzel (veal), pork schnitzel, chicken schnitzel, and zucchini schnitzel. You can schnitzelize anything! Austria is also very well known for its cakes, which have a lot of layers. They serve a lot of apricots, so I enjoyed apricot cake, apricot ice cream, and apricot jelly. Of course you can’t visit Austria without trying their famous Appfle (apple) strudel . We even took an apple strudel class, although I must say my host grandma’s homemade apricot strudel was the best!

In terms of attire, people wore dresses, shorts, jeans, and pants, basically American dress except that they only wore their exercise clothes for exercise. Austrians do have a traditional dress, which for women is a dirndl and for men is the lederhosen. I saw people wearing this attire every day as well. Women could wear dirndls to work, and both men and women sometimes wore lederhosen. People would wear both to church, nice concerts, and even weddings as formal attire. I couldn’t resist buying a dirndl for myself!

Is that even a necessary question?! Of course! I loved it and miss it! I miss the mountains and the lakes! I miss the people, the friendliness, the food, and the music. I am so excited to return one day!