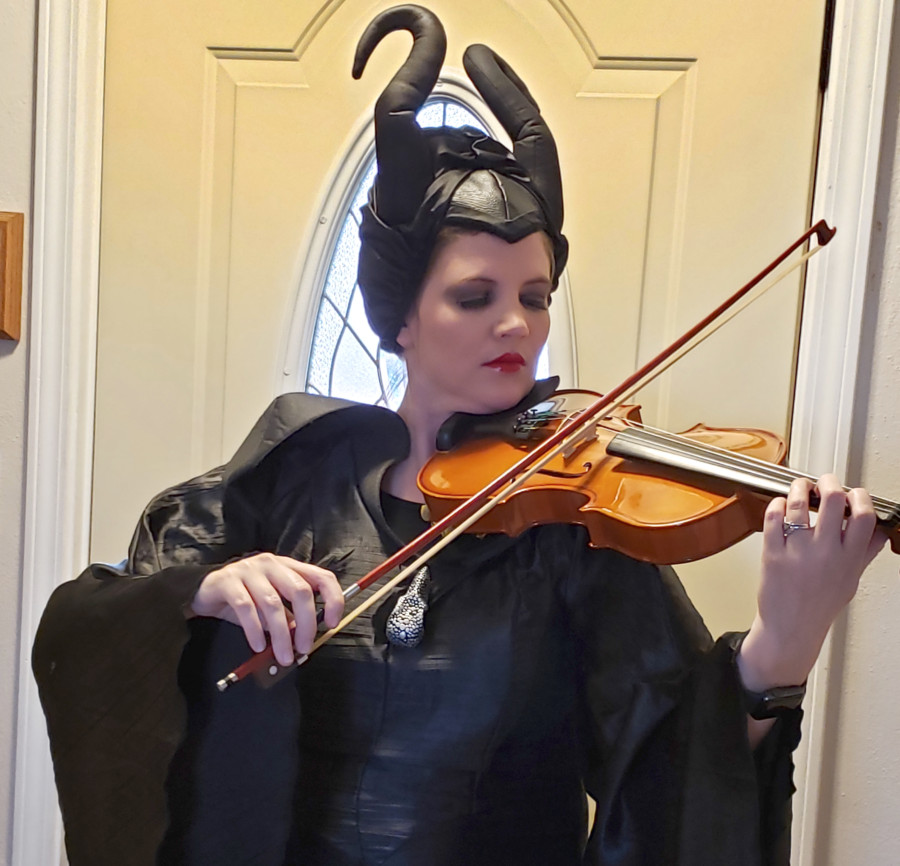 “Death at midnight plays a dance-tune, zig, zig, zig, on his violin.”

The haunting month of Halloween is upon us, and I couldn’t help but revisit my favorite ghostly violin music. Over the past couple of centuries the violin has had it’s bout with the devil, from Berlioz’ Symphanie Fantastique (1830) and Saint-Saëns’ Danse Macabre (1874), to Mussorsky’s Night on Bald Mountain.

Check out my Halloween music playlist!

Saint-Saëns’s Danse Macabre is the quintessential Halloween work, as it celebrates the “Dance of Death” which we all must undergo eventually. The “Danse Macabre” was first depicted in Medieval French art during an era when Europeans frequently endured gruesome deaths due to war and plague. In Saint-Saëns’ 19th century rendition, the violin soloist plays the part of “Death,” who calls the dead to rise at the stroke of midnight on Halloween night. The violin, which we often associate with beauty and lyricism, begins its eerie dance using the diabolic tritone, or “devil’s interval.” In order to accomplish this feat, the soloist tunes the E string down to an Eb to clash with the open A string. The skeletons end their night of frenzied revelry when they hear the rooster crow, announcing the break of dawn.

In high school I played the ominous “March to the Scaffold” and “Dream from a Witches Sabbath” from Berlioz’ Symphonie Fantastique for the first time, and was struck by the power of this programmatic work. Last spring I had the privilege of hearing it performed live by the Illinois Symphony Orchestra in its entirety, and was again blown away by the French musical genius. Berlioz takes his audience on both a literary and musical journey through a series of movements featuring an artist’s obsessive love and grisly demise. I have always felt akin to the romantic notion of the fusion of the arts, and therefore admired Berlioz’ obsession with literature, which he read vociferously. I find that Berlioz’ fantastical literary descriptions of the work really bring it to life. Admittedly, Symphonie Fantastique is a phenomenal musical work in and of itself, but its ghoulish qualities are ever more grotesque when described in the dance of the witches’ Sabbath in the 5th movement, as well as the artist’s execution at the end of the 4th movement.

In Night on Bald Mountain, we encounter another witches’ Sabbath when the devil calls them together to celebrate St. John’s Eve, which takes place June 24th, as opposed to Halloween. As in Danse Macabre, the revelers dance the night away, but upon the return of the dawn, they retreat from the light. Although Mussorgsky composed the original of this work in 1867 (on St. John’s Eve!), his fellow Russian composer Rimsky-Korsakov’s wrote the more famous 1886 arrangement, depicted in Disney’s 1940 film Fantasia.

In 2013, the film The Devil’s Violinist portrayed the life and career of Niccolò Paganini, the famous 19th century virtuoso whose compositions are so challenging even the devil might have a run for his money! Paganini’s intense popularity, bravado, love of violin and guitar, and lascivious behavior made him the rock star of his century, earning him the title “the devil’s violinist.”

Even outside of the world of classical music, the violinist still can’t escape a row with the devil! In the late Charlie Daniels country song “The Devil Went Down to Georgia” (1979), the boy Johnny duels with the devil on his violin to save his soul. Fortunately, Johnny wins out in the end with his flashy fiddling, leaving the devil to suffer defeat.

In my own family, we have always loved Halloween. As kids we usually planned our costumes nearly a year in advance, which our Grandma Carol would sew for us. This was no small feat, as there were so many of us! We especially enjoyed dressing up as the fairies from Sleeping Beauty while watching the 1959 movie featuring Tchaikovsky’s epic ballet. We good fairies always won over the evil Maleficent!

Additionally, our Grandmother Ruth, family composer in residence, loves Halloween so much she wrote a Halloween musical triptych made up of “The Witch of Hate,” “The Devil of Temptation,” and “The Giant of Selfishness.” I can still remember all the lyrics to the first, having dressed up as a witch to sing it as a little girl.

We now enjoy celebrating the holiday with my daughter Annalise who was nearly born on Halloween! Happy haunted listening!