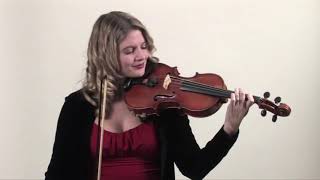 In 2013, the film The Devil’s Violinist portrayed the life and career of Niccolò Paganini, the famous 19th century virtuoso whose compositions are so challenging even the devil might have a run for his money! He had a disease that caused his fingers and limbs to be exceptionally long. Paganini’s intense popularity, bravado, love of violin and guitar, and lascivious behavior made him the rock star of his century, earning him the title “the devil’s violinist.”

Joseph Bologne, also known as Le Chevalier de Saint-Georges, was an 18th-century contemporary of Mozart. Unfortunately, he never reached the fame of his rival composer. However, he rose above his status as the son of a wealthy aristocrat and his Guadaloupe slave mistress, to become the conductor of a prestigious Parisian orchestra. He was also instrumental in the French Revolution, and renown as an excellent fencer.

During her New York audition, Victoria tackles both of these difficult works in addition to the Bach Chaconne and part of the Saint-Saens Violin Concerto.