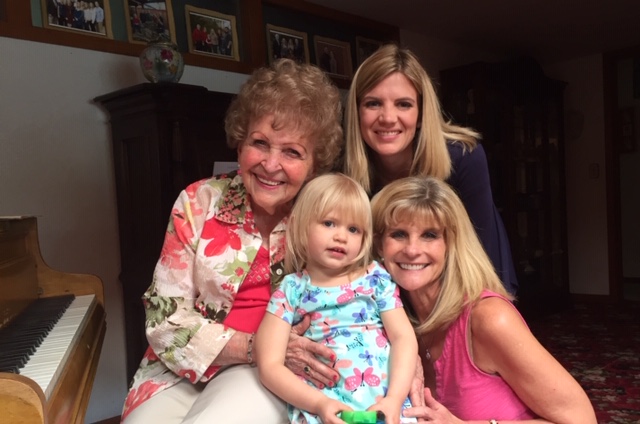 Mother of ten, grandmother, great-grandmother, fellow musician, and author, this larger-than-life person has inspired so many people over the course of nearly a century. Today, I’m honored to talk with my own Grandmother, Ruth Scheer.

Grandma Ruth, how did you develop an interest in music?

I discovered music for myself when I was about eight years old. My piano teacher taught using Otto Meisters’ Melody Way. It was a masterpiece way of teaching music during the mid-twentieth century. In the classroom, one person would sit at the piano while the others used a cardboard keyboard. Our teacher taught us a simple little melody that Meister wrote in the key of F.  Our teacher taught us solfège, as well as how to read music. We also learned the tonic and dominant chords to accompany the little melody, as well as transposition. We’d play the melody in the right hand and chords in the left, then switch. I had to be very observant to master so many things at once. All this set me on fire. I thought it was the most fun and sounded so beautiful.

I loved piano so dearly that I took lessons until I was twenty years old. At that time, I played a large program, including the Grieg Concerto, for the National Piano Players Auditions, a competition I had entered every year for several years.

When I was ten years old, I entered a contest to win a small, 12 bass accordion. Somehow, I didn’t get the time correct and showed up too late for the competition. Fortunately, the judges were kind and listened to me play anyway. They said I would have won had I arrived on time. As a result, my dad and two bachelor uncles bought me a full, $300 Wurlitzer accordion with 120 bass. I began lessons at the age of ten with a fabulous teacher. She was so gentle and almost talked in a whisper. Her love of music really came across. That’s the way we should teach music—let it flow from one person to the other.

Having taught piano lessons to several generations, what is your best advice for beginning piano teachers?

My best advice is to love the students. Make them feel the music by playing little bits of beautiful things, like Bach’s Minuet in G, or Haydn’s Surprise Symphony. Music must be fun, and yet students have to work at it. Begin with simple melodies, and work your way up.

I have started students as young as two and three, however, some students weren’t ready. I had a student who always asked when her lesson would be over, which nearly broke my heart. However, I began giving her five-minute lessons, and in the long run she loved music. It’s no good to teach and bear down on students, but you do need to expect something from them. It’s helpful when the parents are involved with the discipline to get them to practice. I’m the end, you have failed them if, deep inside, they don’t feel the love of music.

Can you tell us more about your music compositions?

Due to my accordion proficiency, I have an excellent chordal background. Accordion lessons are a great way to teach music because you start with C and transpose to every key on the instrument. I drew heavily from that knowledge to write music.

When my home state, Kansas, celebrated its 100 year anniversary in 1961, I composed and published a small ditty called “The Gold of Kansas.” An illustrator friend of mine drew wheat fields in a rural scene for the cover. When my mother died, I wrote the song “Mother Mine” in remembrance.

How do you find balance in your life as mother of ten, grandmother, great-grandmother, author, and musician?

It’s very tricky, but you must put first things first. If you’re nursing your children, you need to make sure that when they’re hungry, you feed them! When they’re a little older, teach them the arts. Give them work to do, which includes music. Teach them discipline and self-expression. For me personally, creating music was a relief from the humdrum tasks a mother does. Little things we don’t want to do, like the dishes, potty training, discipline, etc. are still extremely important, but I needed a creative outlet as well. As a result, we put on The Sound of Music and dressed up as the Von Trapp family. I played the accordion and accompanied everyone, while my husband played clarinet and saxophone. As a result, we developed a hard work ethic. One of my sons said these shows are what taught him to work. If you don’t teach your children to work hard, you have failed them.

Lastly, do you have any concluding remarks on your creative career that you’d like to share with us?

I’ve been very fortunate in my life. I married the perfect husband for me, Harold Scheer, a dentist who supported our large family. My primary role was to be a mother, which I cherished. As a result, I could tell when our children were ready for me to work with them on the piano. We would start at 5 o’clock in the morning. I’d teach my firstborn for thirty minutes, then my second born, and so on. All ten of my children learned to play instruments, and seven of them became professional musicians. We had about five or six violinists, a couple of flutists, a clarinetist, and several vocalists. Music was just a thing we did. Now my grandchildren and great-grandchildren continue to pass on our musical heritage.

Ruth Scheer is a mother of ten children, as well as a grandmother and great-grandmother. She led her large family to 1973 Kansas musical family of the year; was 1987 Kansas mother of the year; and has served as president of the Alliance of the Kansas Dental Association, Wichita alumni chapter of Mu Phi Epsilon, and Thursday Afternoon Music Club. One of her greatest joys is playing piano and accordion in family shows by the Scheer Delights with her children and grandchildren.